I had this dream last night….. I opened up my own training facility here in my hometown.
It was out in the country surrounded by farming fields and when corn was planted and tall, you would never know the facility was there. Now this was not just some ordinary facility, it was state of the art. It has just about everything an athlete would ever need. Let me try to describe it to you.

The outside front looked like a farm house with a big covered porch and rocking chairs for everyone. But once you stepped inside, you walked into another world all together. There were 5 different sections to the big open space.
• The first section was the cardio area where there were treadmills and bike trainers. The trainers were hooked up to TV’s for practice on road races or you could put in a movie. The same for the treadmills.
• The second section was for strength training and rehabilitation.
• The third section was a 2 lane 50 meter pool
• The fourth section was a dining area with kitchen and lounge area
• The fifth section was guest quarters
• On one side of the building was a 3 lane 400 meter track.
We had a staff of many to keep it running from a strength coach, a physical therapist, nutritionist, a sports medicine physician and massage therapist.
On the side of the pool there were huge garage doors that would open to let in light and air.

The facility was open for anyone to come and train, but it was really for those women that wanted to do something for herself. To reach a goal that everyone told them would or could never happen.

Now to play the Lottery and make my dream come true.

What are your dreams? 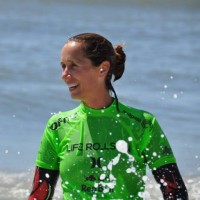 Triathlete in my thirties, trying to be healthy, race strong, and kick butt.

Some girls chase boys, I pass them.

Beauty and the Bicycle

just girl tackling college, city life, and new adventures from the seat of my bike.

Senior Portfolio, Art & Music Department
My Journey to My Best Me

Toward an Authentic Me

This WordPress.com site is the cat’s pajamas

Exploring the path to triathlon

A NC girl trying to get healthy

The Mediocre Triathlete
just a one girl revolution.
The Journey to Ironman